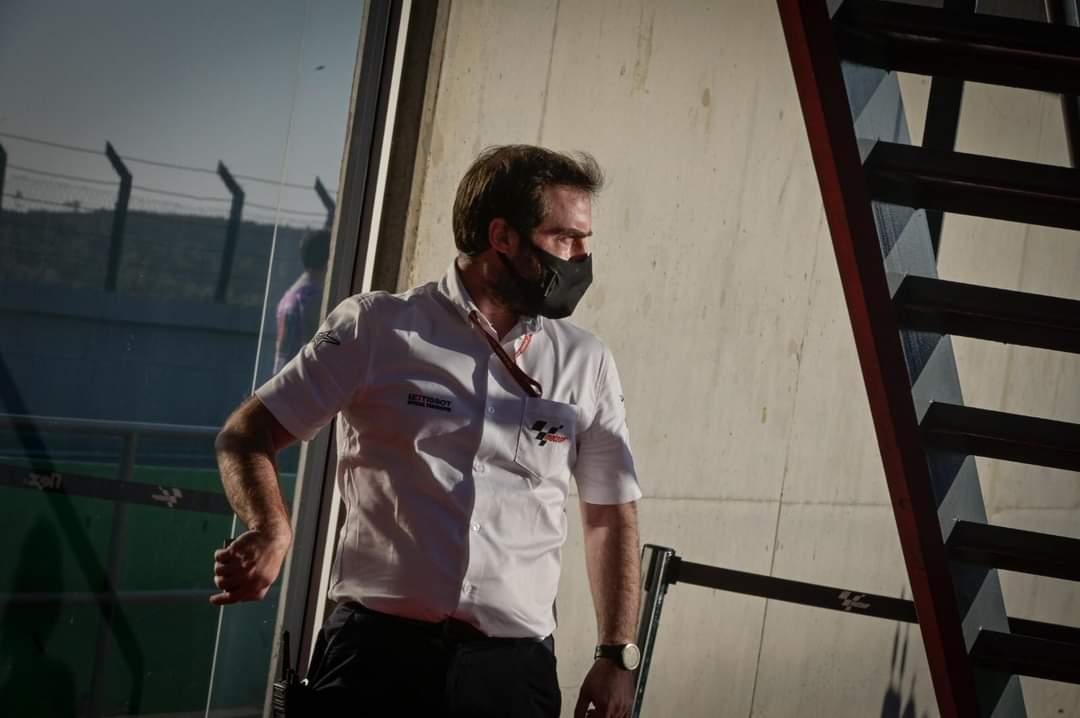 MotoGP and the show that we’ve all come to love and enjoy wouldn’t be possible without one very essential thing; timing and scoring. It takes a whole team in and of itself to bring such an essential function to this sport. We were lucky enough to be able to spend some time with one of the crew from MotoGP’s timing and scoring: Eduardo Alvarez.

Eduardo Alvarez gives us a glimpse of things “behind pit lane wall” by showing us the functions of his department. We also delve into the sport from his personal experience and how it’s evolving, as well as insight into the unique individual that he is, who ended up being an integral part of the world championship.

CVN: We have here with us, Eduardo Alvarez of timing and scoring of MotoGP. He works for Dorna. Eduardo, can you tell us a little bit about yourself?

EA: I’m Eduardo, I’m from Madrid, from Spain, and this is my 16th season in the world championship. I like traveling, I like motorsports; anything that makes noise, I like it. We’ll see what happens with the…Energica.

CVN: Is it true that Europe’s going to be banning non-electric vehicles on the roads? I hear there’s a rumor that in Europe, by a certain year, like 2035, gasoline operated engines will not be allowed on the roads…

EA: I’m not sure. In Europe, they are starting to make these regulations, but until this moment arrives, I’m not sure anything is going to be real. Probably at least ten [years], or…not sure. We’ll see.

CVN: Yes, it’s highly ambitious, but what about the…you mentioned something about the noise and how much longer… What about the championship for MotoGP- do you think they’re going to move completely to electrical?

EA: We are now a changing world, so who knows. It’s the trend now, but it looks like [it’s what] the market is going to. We can only wait and see what happens. I’m not sure about it.

CVN: That makes sense, since these are prototype machinery, so the technology trickles down to the production vehicles. Now, I hear that you are actually into cars! Can you tell us a little bit about that?

EA: Well, I like cars. It’s where I started to work: in carting and doing the Spanish championship. I like cars a lot, but as I mentioned before, everything that makes noise, like motorbikes and anything else. And, well, I like it. I like everything [laughs].

CVN: That’s awesome. I think you told me personally, one time, something about your father getting you into cars…

EA: Yeah, my father was a driver in the Spanish championship, and once me and my sister were born, he quit this and started to run a timing company, with a few friends. Then, that’s where I started to go with him to the races, and that’s where I come from. That’s where my hobby comes from. Because for me, it started as a hobby, and now it’s my profession. So, I like my job, a lot. It’s a dream come true.

CVN: Wow. That’s amazing. That’s kinda like “you’re in the family business”- passed from father to son. And then, how did you go from cars to getting into motorcycles- the most elite motorcycle championship in the world, at that?

EA: Well, when I started with my father’s company, we did timing and scoring for everything: cars, motorbikes, jet skis, athleticism, rallies; everything. So, they contacted the company where I worked at, to make a substitution, and since that moment, in 2005, I joined the company [Dorna] and until today.

EA: Yeah, at the beginning of the mid-season, they contacted me to do this substitution, and since then…

CVN: That’s interesting that you were called in, just to do a substitution, and then it becomes your permanent job.

EA: Yeah, I’ve been lucky, because I just finished it. It’s the reason… everything, to be in the right place, in the right moment, I think.

CVN: Yes, fate. Now, when people think about timing and scoring, they might just think of someone with a stopwatch, or the people sitting in the towers with computer screens in front of them, watching all the timing for the different vehicles going by, like with the motorcycles. However, what does your job actually consist of?

EA: Well, apart from that, from control at all the races, with the computers and all the informatic, we’ll start on a Tuesday. We fly to the place; to the circuit on Mondays and we’ll start setting up on Tuesday…Tuesday, Wednesday, and Thursday. Friday, Saturday and Sunday we do the timing and scoring, timing in the control tower, and on Sunday after the races, we dismantle everything in three/four hours. But, what we start in three days, we dismantle it in three/four hours.

CVN: So, a lot of setup, but the dismantle is quick.

EA: Yeah, because you have to make a lot of checks. After, you don’t have to check anything, because you have used it before, and it has been working, but then, on Tuesday for example, we have arrived to the circuit and we check all the ropes, antennas, intermediate points, the pit lane speed control…and you don’t know when you arrive, what you can find, because some of them; the ropes or antennas, have broken. I have to fix them or repair them.

CVN: Oh, that’s stressful. Do you have any interesting stories about, like you said that you arrive on Mondays..have you ever been late? …Where there’s missed connections, like Argentina a few years ago, where you couldn’t get flights out, coming to Circuit of the Americas? Or having big problems with antennas or any other equipment?

EA: Well, I remember once in Malaysia, when it was…I don’t remember where we came from, but the asphalt was very new, so we had to make all the loops new again with the cutting machine, the antennas…and we finished working at four in the morning, or something like that.

CVN: Did you know you would have to do all that extra work?

EA: We knew we had to do something, but not to make all of those, and imagine the temperature in Malaysia is very high, so…

CVN: Okay, and then, what’s your favorite thing about working in the championship?

EA: Well, you travel to a lot of different countries and it’s wonderful. It’s very nice. You meet a lot of people, you see different cultures. It’s really a good experience. Different cultures, ways of living, and you go to countries, or places that you don’t imagine they live like that, so you make an idea.

EA: The world is too big.

CVN: Yes, well a lot of us are very jealous of you, that you get to do something in such an elite series, with your passion of racing, the sound, things that go fast, and traveling the world, so that’s very awesome. Thank you for sharing with us, and I want to thank you very much for your time.