Inspired by MotoAmerica announcer, Greg White, and his movement to ride to the MotoAmerica races (“Ride to the Races”), I had almost a whole season of races ahead of me. Wanting to make the most out of life, I decided to hop over my own two wheels and do just that; ride to the races! For the weekend of the round taking place at Virginia International Raceway (VIR), I planned on taking off on my 2008 Kawasaki Ninja EX250 from Chicago, to the border of North Carolina and Virginia, where the circuit is located, to catch some live MotoAmerica series racing action.

Originally, I had planned on heading off to VIR, almost 800 miles away, a day or two earlier, but the universe had different plans for me.  Of course, as is prudent before any ride on two wheels, one should do a pre-ride check, since not even a short ride should be performed without a motorcycle being in good mechanical condition, let alone a 1,600 mile round trip.

Upon inspecting my bike, I came across not one, but multiple issues with it. An oil change before this long journey was to be expected, but not what I ended up coming across… For starters, my rear tire was in no condition to go on any long trips. What I had discovered was a PLUG in my tire! A mysterious plug at that! One might find random nails in their tire…normal; it happens to all of us at some point. However, a plug?!? This is normally maintenance one would do or have done to their bike to their own recollection, but not in my case. Yes, bizarre, indeed (although my best guess is that with the poor cleanup job from the construction work in my apartment building where my bike was parked, I had caught a nail from it, and the construction worker there who had a crush on me, had patched it himself without telling me). Aside from the plug in my rear tire, there was also a heavy duty staple sticking out of the tire. Additionally, my hand grips were toast and needed replacing.

This extra work needed on my bike was quite a setback, and the most pertinent thing, the tires, were difficult to find in my area in the size needed, due to product shortages. I searched high and low throughout Chicagoland, only to come upon finding some sport touring tires that would fit my bike- it worked out perfect, as this would be the longest journey I’ve ever taken on a motorcycle, and I was ready to get going, touring style!

This took some time hunting parts down and finally being able to have the work performed on my bike (shoutout to my friends Harris and Diesel for helping with this), but by Friday morning, I was finally ready to rock n’ roll (minus the rolling part). Even if it meant I would miss all of Friday’s sessions at VIR, I was psyched to let my journey begin.

In addition to preparing the bike itself for the journey, I also needed to make a packing list. As a serial overpacker, this was an exciting challenge for me- I had three bags in total in which I could place all of my things in. Being that I was traveling on a Ninja 250, there weren’t so many options for luggage, like some other motorcycles. What I was left with using was: a small hydration backpack (you always want to keep hydrated while on the moto- especially in the heat), a large backpack (I stored my media equipment in this, so that I may also collect coverage while at the races), and a motorcycle bag that would sit on top of my cowl/passenger seat area.

Being a little bit of a “girly girl” this would be a department where I had to reduce my supplies down more than usual. I figured there would be things such as soap, shampoo and conditioner at the hotels I was staying in, so that was already one thing reduced. I also tried packing versatile clothing items, so that I would be able to rewear some of my clothing on different days. Some of this clothing was the clothing I was already wearing underneath my riding gear (ATGATT), but since I take my protection so seriously, my full on Alpinestars SMX boots would not cut it for off of the bike as shoes, so I packed the thinnest pear of sneakers I could find, and could bomb around the racing circuit grounds in. In addition to my media items (the bulk of everything) and the other basics, I also wanted to be prepared for any inclement weather, and packed my rain gear, as well.

There were two different main routes from Chicago to Virginia International Raceway that I had an option of taking:

The first main and suggested route was going through Ohio and West Virginia. The second route option would take me down through Kentucky. The first route was slightly quicker, and lesser miles, however I ended up opting for the second route- Ohio is not really known as being the most interesting state to travel through, and I definitely didn’t want to risk getting lost on a motorcycle in West Virginia…have you ever seen the movie “Wrong Turn”?! The second route I was more comfortable with, being that I was slightly more familiar with Kentucky, knew that it definitely wouldn’t be boring, and I would be passing through some cool cities there. Both of these routes, however, went straight through Indianapolis, so I scheduled the perfect lunch stop while making it to that point in the journey.

With everything finally packed up, I was ready to go. My gear I was wearing at all times while riding for the trip included: my boots that I previously mentioned, a full face helmet, leather gloves (full cuffs, carbon fiber knuckles, and the pinky and ring finger attached), a leather jacket with full padding, and textile overpants. This weekend would be a hot one, both at home, and in Virginia. It was already boiling outside, but the clothing for under my gear was a very lightweight pair of workout shorts, and a sleek, lightweight, long sleeve undershirt (for ease of getting my jacket on and off), with a t-shirt over it (the longsleeve was so light, that it was slightly sheer).

Although this wasn’t my first time traveling a long distance on a sportbike, or with motorcycle luggage, this would be my first time traveling with as much stuff as I had. The large backpack that I had, was a military backpack that was gifted to me after my normal motorcycle backpack had broken, some years back. This is my main motorcycle backpack now, and people always joke, while I wear it, that the backpack is half the size of me (they might not be wrong!). Being that this backpack is where I stored the bulk of my media equipment, it was not light. However, since I’m so used to traveling with a backpack, I knew I could lengthen the straps to have it rest on the seat behind me. This proved somewhat of a new challenge, though, as now the backpack was fighting for space with the moto bag that I had strapped onto my rear seat. This pushed me forward in my seat a little bit, so it took some adjusting to get used to. Then, for my hydration backpack, I wore that underneath the big backpack. For my rear seat bag, I used a bungie net to secure it to the seat.

Finally, after preparing and warming up my motorcycle (all Ninja 250’s are carbureted), I was off! I rolled and made it all the way…..down the street! I only made it down the street before having to pull over and make some adjustments. After this, I finally had everything positioned in a way I thought would work, and only had about two more blocks before hitting the interstate. Of course, the interstate by my house is right in the middle of the third largest city in the United States, so traffic was at a crawl. I was starting to melt in the heat, and the luggage I had was a bit bothersome. I also had one more stop before really hitting the road, which was one exit up; a cheaper Shell gas station that I liked to frequent, to fill up on gas.

After getting gas, it was finally go-time for real, and I headed towards Indiana. I was a little bit worried about the heat and being uncomfortable with all that I was carrying, but once I was out of the congestion of the city, things became a lot more comfortable. Luckily my route for my first major stop was one that I was familiar with, and I would arrive in Indianapolis close to three and a half hours later. I tried making my way to this city with as few stops as possible.

Waiting in Indianapolis to have lunch with me, was none other than motorcycle lover, comedian, and actor extraordinaire, B.T.! I made it to my friend B.T.’s house in Indianapolis by mid-afternoon, and was greeted by friendly faces and air conditioning! I got to meet B.T.’s roommate, who was another motorcycle rider, so we were instantly able to start chopping it up about all things moto. I quickly got my giant backpack off of me and stripped out of my gear to be comfortable for just a little bit. The boots I had been wearing were great, especially for riding the track, but were not the most comfortable for long distances. I was happy to change into my flat sneakers that I had packed, for my lunch with B.T..

We hung out for a short time at B.T.’s house before heading to lunch. I was super close to convincing B.T. to also ride out to the races, but his Ducati Multistrada was too due for service to make it on a trip that far. The MotoAmerica races at VIR just also happened to be the same weekend as the Indy 500, and B.T. and his roommate had paddock passes to that race. How cool is that?!

There’s just about nothing greater, though, than riding motorcycles and catching up with friends.  We were able to do just that, during my pit-stop in Indy. We had taken B.T.’s truck to lunch, but when we got back, B.T. pulled out his Multistrada from his garage. B.T. then pulled out my bike, and started cleaning and polishing it for the road (something I didn’t have time to do before starting my journey). Talk about a great friend! I was able to marvel over B.T.’s  bicycles and helmet collection in his garage, while he was spiffying up my bike.

Once finished, B.T. geared up himself and we went on a ride together. One thing about going to unfamiliar places on a motorcycle, is if you’re doing it the old school way, and don’t have a GPS or cell phone mounted to your bike right in front of you, then there’s a lot of memorizing involved, as well as stopping to check your directions. Getting back on the road from B.T.’s house wasn’t the easiest, so he had me follow him on his motorcycle to show me the way. I never would have imagined the highways in Indianapolis to be so confusing, and I almost missed an exit following B.T., but finally he waved goodbye, and I was pointed off in the direction of Louisville, Kentucky. 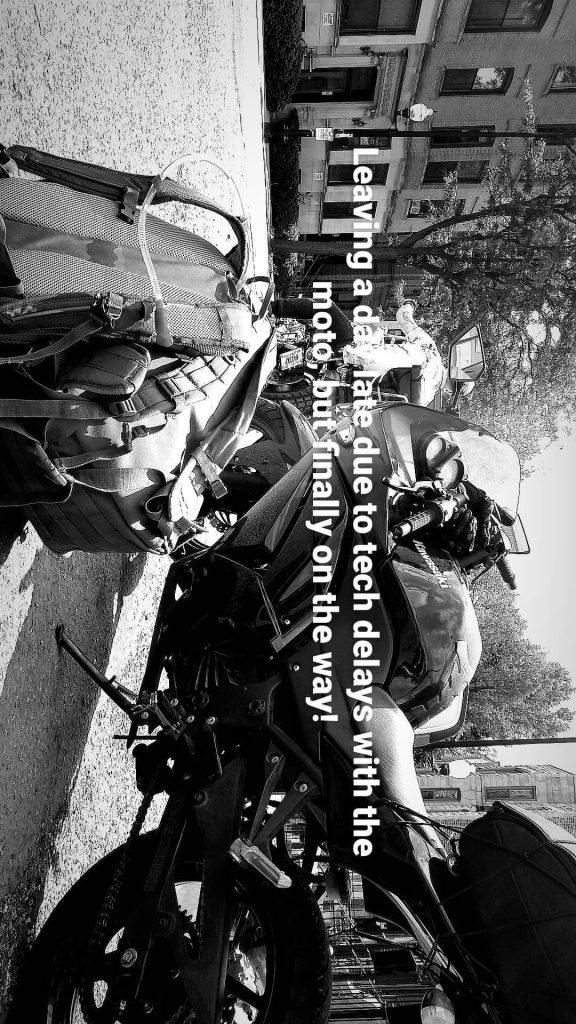 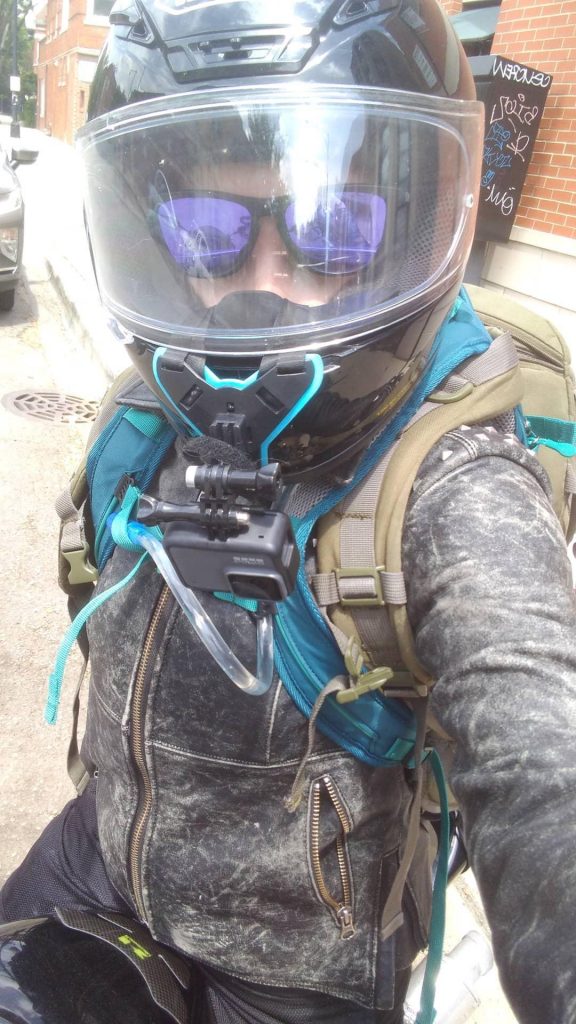 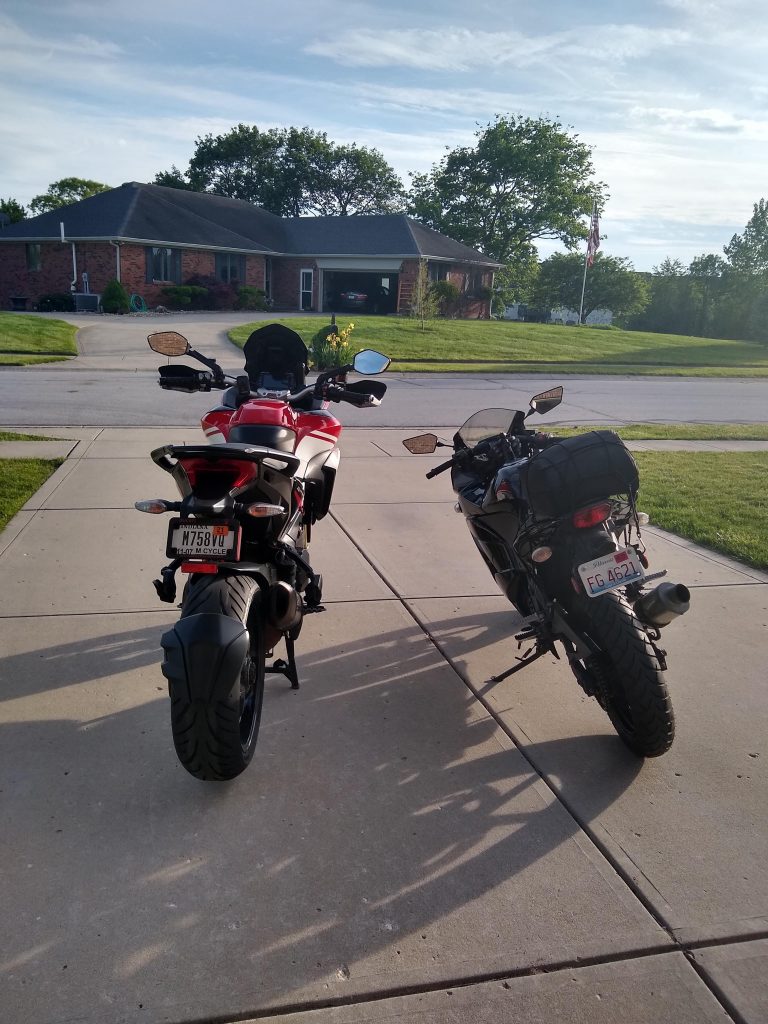 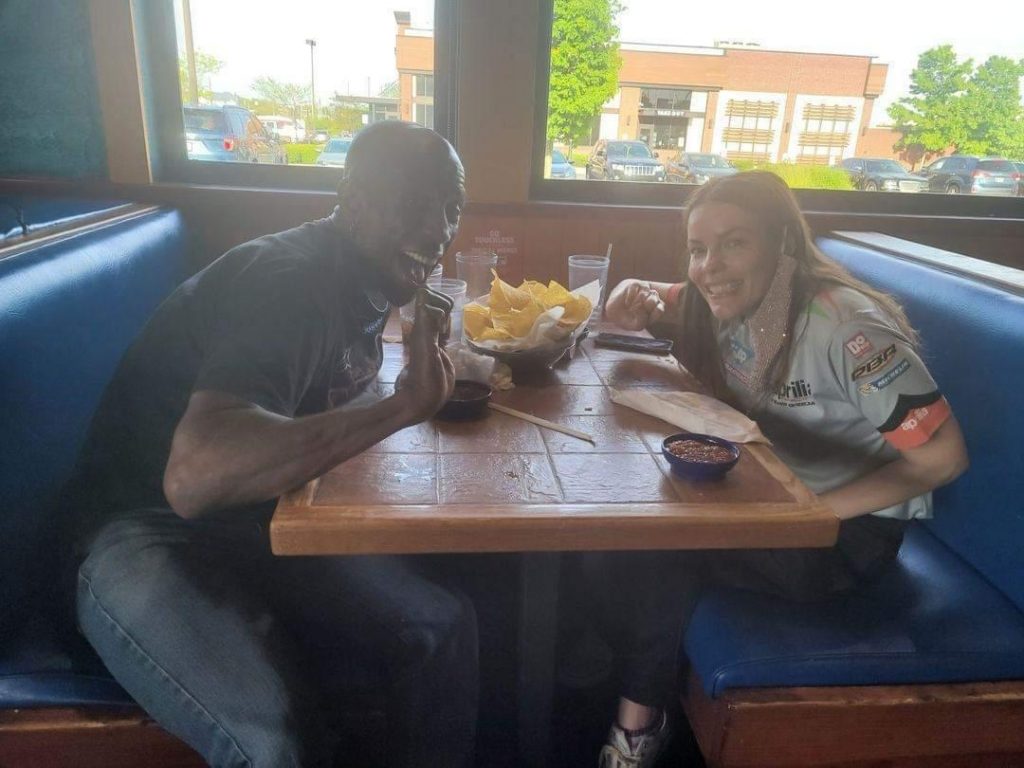 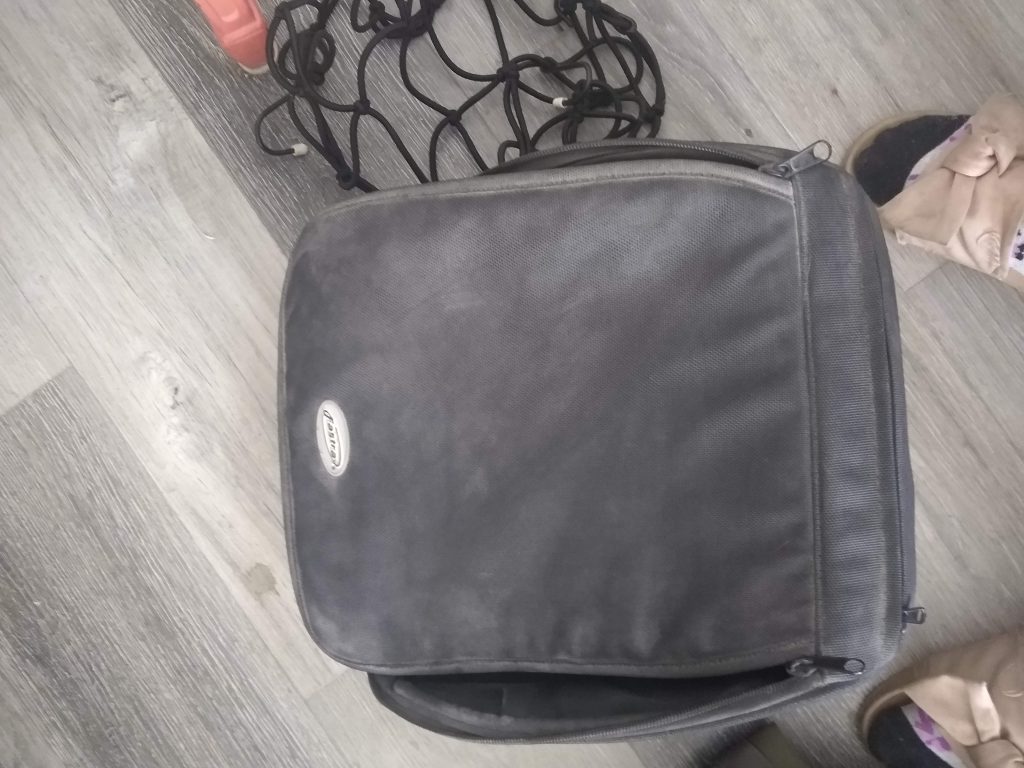